Newmarket is not now just famed for horses and the odd sausage. Alistair Thompson, the Store Manager at Tesco, and his team, have also put our town on the map by appearing in Channel 5’s, three part documentary, Inside Tesco 24/7, which aired recently.

Discover Newmarket popped in store to see Alistair to find out the low down following his new-found fame. We asked him a series of challenging questions, check out his answers: 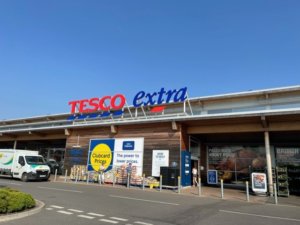 How many people have come up to you in the store to tell you that they have seen you on TV?

Literally hundreds. This has ranged from jokes about getting an autograph (nobody’s actually wanted one for real yet) to customers generally interested about how the store came to be on the TV and the history of Tesco itself. We’ve even had customers come to the store who didn’t realise there was a store in Newmarket! I said I haven’t been asked for any real autographs yet but that isn’t technically true as I went to speak to the year 4 group at All Saints Primary in Newmarket and a few of the children there asked for one which was cute if not slightly embarrassing.

Why was the Newmarket store picked to feature in the series?

We were picked because we are clearly the greatest Tesco store! On a serious note, it was actually put forward by our previous Chief Executive Dave Lewis. I believe it was because we are one of the newest built shops in the country and the store has also been used for Tesco adverts before and some internal comms videos etc, so the colleagues are used to having cameras around.

Since the programme aired, do you think more people have visited the store?

We have definitely had some new customers visit the store and have also had a lot more ‘Tesco’ visitors i.e., people from head office. I wouldn’t say it has had a huge impact on numbers but as someone famously said – every little helps!

Remind us how many new staff you have taken on since COVID and what the recruitment process was like?

At the height of the crisis, we recruited an extra 130 colleagues into the business and most of these joined right at the start in the first few days. The recruitment process was crazy and so different to anything we have every done before. We usually can only take people on who pass an online application and head office screening to check for right to work eligibility. Due to the nature of how quickly we needed to take people on, this process was shortened and condensed to about 20 minutes with all checks done manually. We were able to start people on the same day as them walking in and applying, this was unheard of previously. When the first lockdown was announced we had over 300 people walk in looking for work – it was like nothing we have ever seen before and probably won’t ever see again. It was very emotional seeing so many people in need and in distress but also heart-warming that we were able to help in some way by giving them work when they needed it most.

How many employee’s names do you really remember?

Ha ha – I am pretty good to be fair. We have over 500 colleagues in the store and probably about 200 of them worked in the previous store which helps me as I also ran that for a year. So, I would say I know the vast majority but wouldn’t put a number on it. The thing is, we have so many people join us at seasonal times, and we also are constantly recruiting in some area or other due to people leaving, change of careers etc so when new colleagues join it can be hard to remember their names straight away, but I do try my best!

Were you surrounded by hair stylists and make-up artists prior to filming?

Afraid not! It was all very simple actually – just a single camera man, a sound lady and a head office contact. Due to Covid restrictions, it meant fewer people were involved behind the scenes. It was rather different to when the Tesco adverts were filmed here 5 years ago, where there were 150 extras, an array of trucks and catering facilities, make-up artists, stylists etc. It was obviously prior to the shop opening which made it even more bizarre and due to the time of year that it was meant to be, there were fake snow machines and all sorts of crazy contraptions. That really was a look into the TV industry, and all again was very exciting. 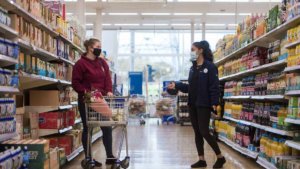 Did speaking to camera come naturally to you and the team or were there lots of re-takes?

As I said previously, we have done some videos and filming before for internal Tesco comms and training videos so yes it all came pretty naturally. We were really keen for them to see the real goings on in store, so we wanted it to be as natural as possible, hopefully that came across. There were obviously a few bits that they retook due to noise in the background or something like that but overall, it was very smooth.

Did anything get cut that you thought should have featured in the final programme?

I thought the programme was brilliantly made and gave a real good balance between Tesco now and the wonderful history under Jack Cohen. There were some great scenes that could have been in it with many other colleagues and a couple of our best and most loved customers. There was also a bit when I talked about the NHS priority shopping day and how we gave away £60k of Mother’s Day flowers to every NHS worker to thank them for their efforts. Unfortunately, those didn’t make the cut. That being said, I think the production company made an excellent, funny, light-hearted and informative show that was great to watch. I am obviously a built biased though!

Did the filming boost staff morale?

Without a doubt. This year has been the toughest year we have ever faced, and my amazing team of colleagues really have been through the ringer at times. Without exception they have been amazing and have come to work, day in, day out ensuring that the people of Newmarket and the surrounding areas can get the essentials they need. To see some of their great stories on the TV was just lovely to see.

Are there likely to be any more TV appearances anytime soon?

Who knows! Nothing is planned yet but it’s early days. I doubt Hollywood will come calling but nor would we want it to. We love what we do here at the store and couldn’t wish for better more rewarding jobs.

And lastly – Out of all the amazing, guided tours that Discover Newmarket do, which would be the one you would most recommend?

To be fair I find it really hard to pick one after speaking to you and finding out about all the tours. I really was taken aback about how many amazing tours that are available right on our doorstop. If I were to single out a couple, I will definitely be signing up to the Champion Trainer’s tour as that will be something I will find fascinating and I am also booking to go on the Tattersalls tour. I have lived in the area for several years now and am ashamed to say I have still not been – so I will be booking that in very soon!

Thank you Alistair for your time and we certainly look forward to seeing a TV star on one of our tours! 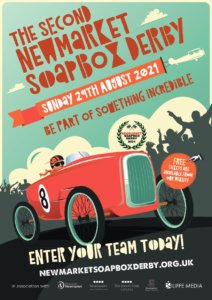 In a town internationally renowned for horseracing, Newmarket’s Town Council brings you an alternative form of racing in the form of the Soapbox Derby. 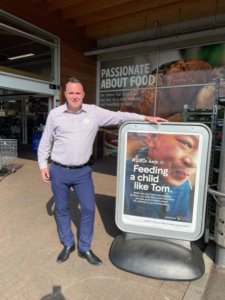 Newmarket is not now just famed for horses and the odd sausage. 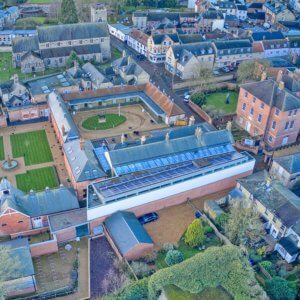 Our wonderful museum has had an exciting time of late with a series of exhibition openings including one by the Princess Royal herself! 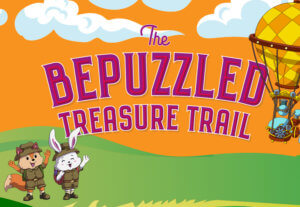 Come and Join our BePuzzled Family Trail this Summer

This summer, families in Newmarket will be able to track down 10 colourfully outlandish vehicles on a high street trail thanks to newly formed group, Family Trails. 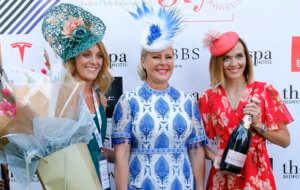 Exhilarating and Entertaining Events for July

As we enter the month of July it is of course unfortunate that the government’s re-opening roadmap did not go to plan. 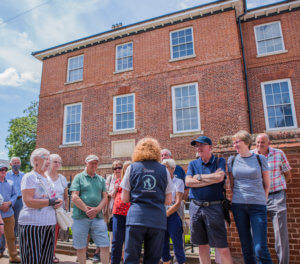 Discover Newmarket, the town’s official tourism organisation, is back up and running with their extensive programme of behind the scenes guided tours. 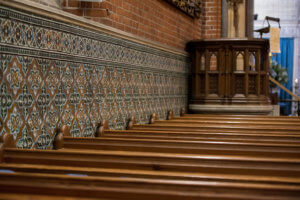 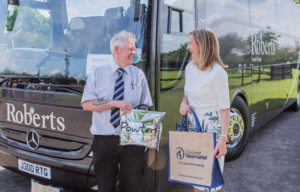 Discover Newmarket has always warmly welcomed groups to the Home of Horseracing but after a tough year they wanted to make sure coach operators knew just how much they were valued.

An invitation awaits you at Dojima Sake Brewery in Fordham for their Summer Jazz Party on Saturday 14th August. Thi… https://t.co/FlG50QNAnm

Thanks @GroupLeisure for featuring our tours as part of your "In the Spotlight" article in the latest edition of yo… https://t.co/20QDD3Onjx